Where Did That Sound Come From?

Where Did That Sound Come From?

Have you ever changed plans in the middle of a travel day only to nearly regret it? Or have you wandered somewhere completely unprepared to what’s coming? Then, we probably share a similar story. Here’s mine.

Laos is beautiful, very beautiful! And the town of Vang Vieng in particular is so picturesque: the lush green paddy fields surrounded by towering limestone mountains, the gently fleeting clouds which you can almost grasp with a little leap and the magical turquoise blue lagoons hidden in the midst of the wild rainforest! 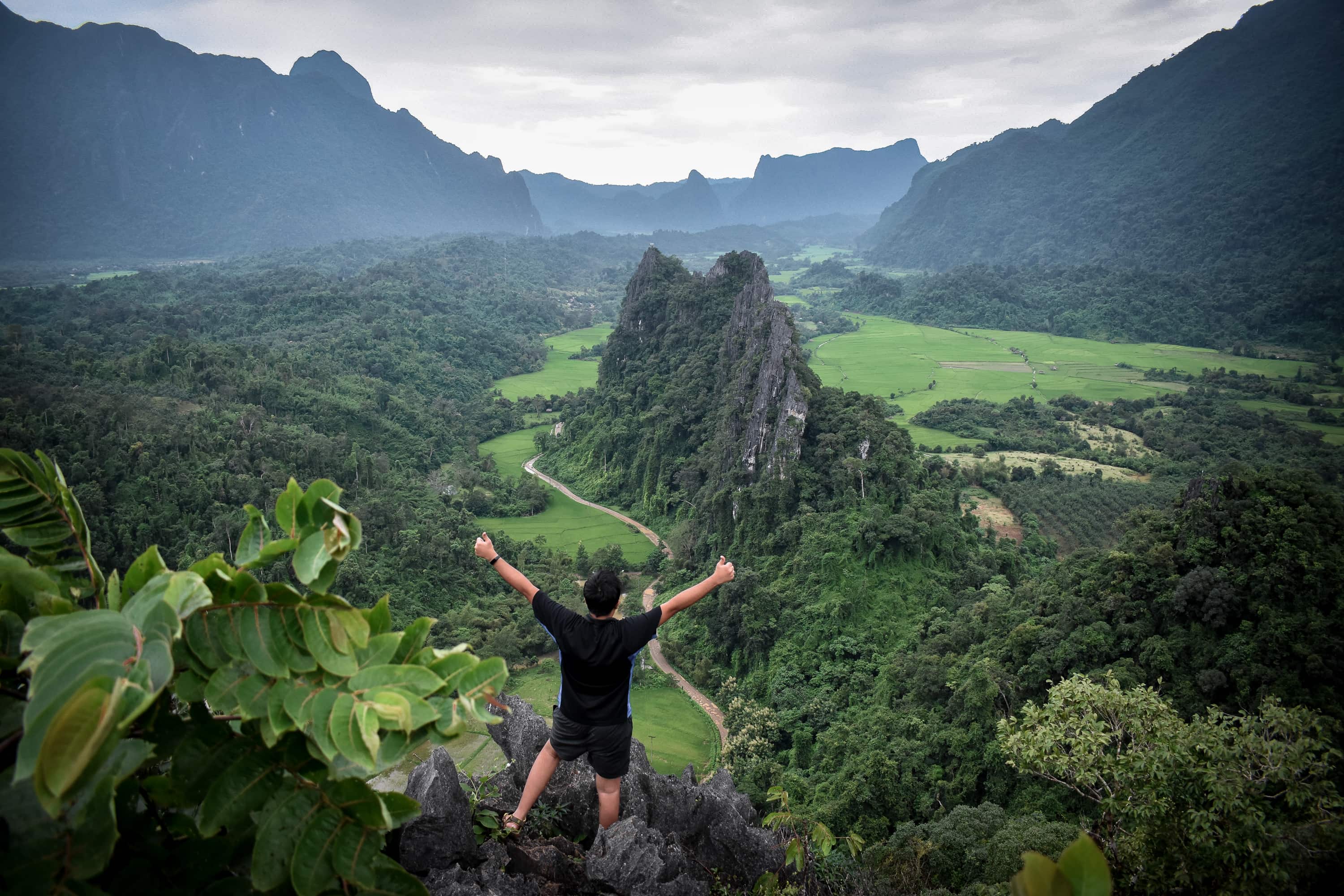 I’d convinced Shish about the plan for the afternoon; we’d go exploring the Tham Chang Cave and then, relax at one of the blue lagoons to cool off from the tropical heat. We wore our swim wear, T shirts and flip-flops and rode off on our bikes – after-all, it was only going to be really hot in the cave and Lao people don’t bother.

After the visit to the Cave, we rode towards the lagoon only to find what we had been searching about ever since we decided to visit Laos: the NamXay Mountain! It’s got some of the best views in the whole region, and the photos on the internet had us hooked.

The detour of curiosity

We parked the bike at the “Ticket Counter” where a lone lady took a small fee and told us in Lao and signs, that the climb would not take more than 20 minutes. After all it was 4:30 pm and we’d make it down safely, well before dark. So we decided to do it.

The hike, the trek or the challenge?

I will never forget the climb. It was off season in Laos and there was no one at the mountain. It was a rainy day and the jungle had grown so thick that even the rain found it difficult to come through the canopy. The first few metres were a small incline, and then with branches and creepers cutting across our path, we suddenly started to notice the steep climb. The wet soil only made the trek harder, slipping over meant we’d be going downhill in a dense jungle with no one to help! I still wonder if anyone would’ve heard a scream from there.. probably not.

The flip-flops had already given up – we were holding it in our hands and climbing barefoot. And to top that off, my swimming shorts made the climb even more harder, you know. Probably worse for her, I thought. Just then, Shish screamed.

The struggle to the top

She had lost her balance at the edge on a patch of loose mud, but she had caught on to a vine sprouting from a branch above! We wanted to turn back, but believed we were almost there. There was no path, but even a smidge of sunlight that we caught gave us the energy to continue. An hour later we had made it to the top, nearly – there was a stone wall towering about 10 feet and we could see the summit. I thought my shorts would tear away along with Shish’s sarong – it was a terrible idea to have trekked this way, let alone first time wall climbing!

We somehow managed to do it – I still don’t know how! But the view was absolutely worth it. The valleys carpeted with paddy fields appeared so unreal from up there. And the limestone mountains appeared like a towering wall, all around. There was a small hut at the top, on stilts. We sat there resting and cooling off in the jungle breeze. We found two other humans there and we were glad! After enjoying the views and shooting some photots, we decided to head back; it was nearly 6 pm and we figured it’d take longer climbing down in the darkness. 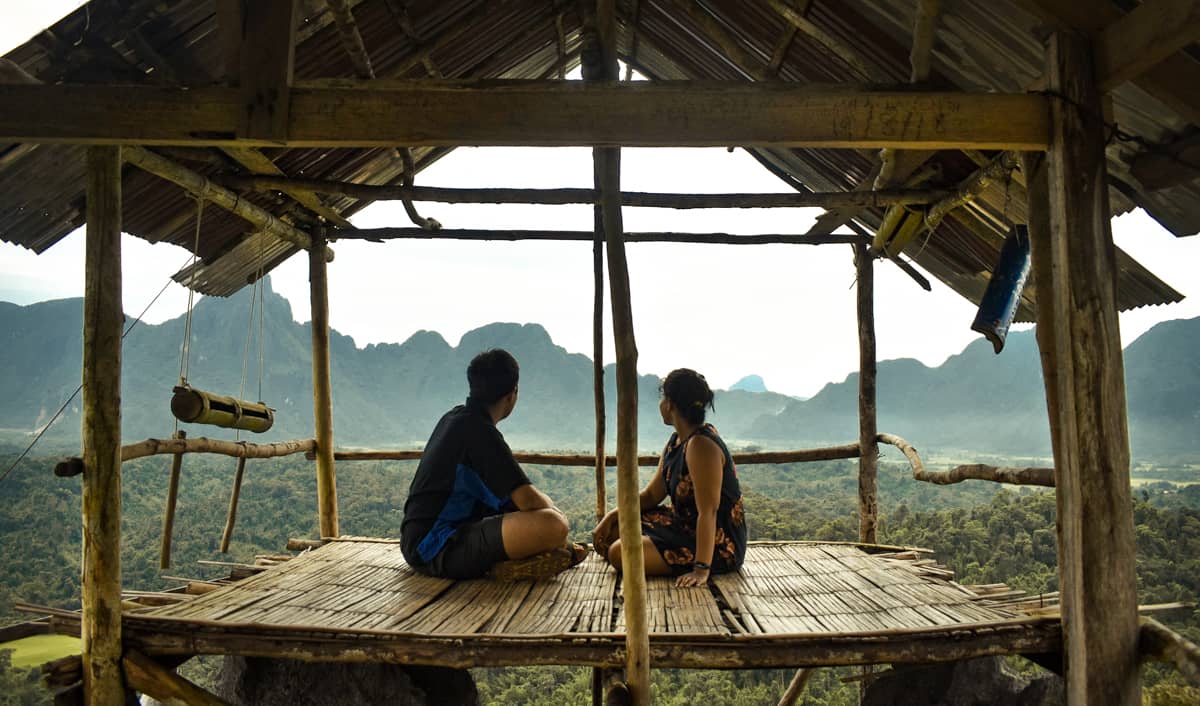 Wait, what was that sound?

And we weren’t wrong! It was not the darkness this time, but it was the eerie animal calls, sometimes distant, sometimes unnervingly close – but nothing visible! The other two people never came down with us.. and it was already past twilight. The slippery mud or the restricting swimwear weren’t the worry anymore.

About thirty minutes later, in a nearly black sky, we made it down. The “ticket counter” had closed and the woman, long gone. There was a stream of fresh water flowing right by the fields there and I washed my face, thinking deeply about the crazy evening we had just experienced.

Reflecting on this, even today

There was a medley of joy, fear, optimisim, teamwork, curiosity, the stamina (and the lack of it) and the sudden sense of animal instinct that had all come together in a couple of hours. I probably cherish this the most, from our visit to Laos.

Would I do it again? Yes… but probably not with swimming shorts and flipflops.